Posted by RealMommyChron on July 6, 2013

We are so ready for this move to the suburbs.  So, so ready.  We did our time in Manhattan and then in Brooklyn.  We tried our best and have wonderful memories of both, but it is time to follow the other ‘three child families’ to the land of grass and guest rooms.  For us, the choice is clear.

But that doesn’t mean saying goodbye is any easier.  It’s always hard, no matter what excitement awaits you on the other side of change.  I have already explained the ache we felt about saying goodbye to Carlitos’ kindergarten teacher.  Our final playground play date with his classmates and neighborhood friends wasn’t any easier.  Following these adieus, we then planned a proper sending off from the city itself for our final weekend as New Yorkers.  The truth is, we will actually be able to get into the city a little bit faster from New Jersey than Brooklyn, so it isn’t as though we won’t be back often to explore.  There is just something different about coming in from another state, rather than another borough.

As luck would have it, Carlitos’ baseball team was scheduled to walk across Citifield at a METS game last Friday, the beginning of our final weekend before leaving Brooklyn.  Talk about a New York memory!  Although, it’s mostly a memory we will have to hold in our minds, since our child somehow didn’t hear us yelling his name from about three yards away, hence no actual photos of his face. 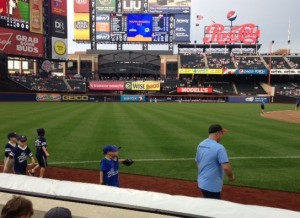 The rest of the night was perfection, filled with hot dogs, peanuts, beer and some great plays by the METS.  Even the METS’ loss didn’t dampen the evening, as they were playing against The Nationals – a team with a special place in Carlitos’ heart since he was born in DC.  (Which you will learn within 5 minutes of meeting him.  He will find a way to slip it into conversation as quickly as someone who ‘went to school in Cambridge, MA.’  Not everyone is as proud of being a DC native as a Harvard  grad, but I respect his loyalty.)

Late Friday night the boys’ tias (and tio) arrived, bracing themselves for a 6:00 am wake up call from some very excited nephews.  The combination of a visit from family and our final weekend as Brooklynites, led us to pack our weekend with multiple activities, many that we had been meaning to get to and would finally check off our ‘NYC bucket list.’  Sesame Street allowed our guests a little extra time to sleep in, but by 8 am we were all tearing into bagels and a variety of schmears from Terrace Bagels (Our local bagel shop, which is touted by many as the best bagels in all of NYC, and certainly in all of Brooklyn).  We then headed off toward the subway to make our way to Roosevelt Island – a location we kept meaning to visit during the past four years.  When you have spent over a week in a steaming hot city, even the smallest addition of greenery and waters edge breeze makes you feel refreshed and recharged.  We strolled to the Amish Farmers Market I had read about to see if we could find treats for a picnic lunch on a grassy knoll overlooking the water.

Reality check:  I poked and prodded everyone along at a faster pace than they would have liked all the way to the market, as I feared it would close before we got there and then we ultimately found a grassy knoll to sit on overlooking the river and Manhattan, but it definitely still harbored broken glass and probably a used condom or two, just like any other grassy area on the big island across the way.

We picked up pickles, olives, freshly pressed juices, olive bread, rolls and jam and nibbled away while the boys climbed nearby trees.  Sometimes things don’t need to be idyllic to still be perfection. 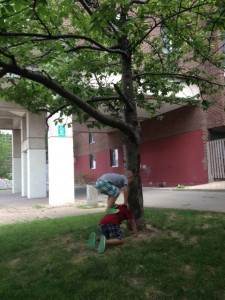 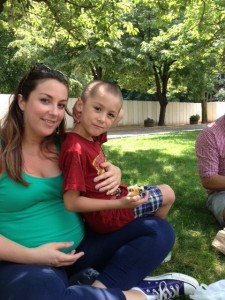 (Despite the awkward face, Xavi actually loves olives just as much as the rest of our family…if not more.)

We then (truly) strolled back to the other end of Roosevelt Island in order to catch the air tram back into Manhattan.  Did you know that the tram to Roosevelt Island is simply one ride on your Metro card?!  I find this fact mind-blowing for some reason; and it certainly means everyone should check out this quiet little island getaway at least once. 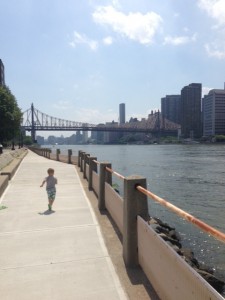 Okay, Xavi doesn’t comprehend the word ‘stroll’ but the rest of us were definitely ambling along and soaking in the views and the beautiful weather. 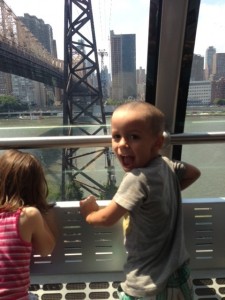 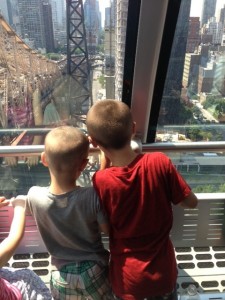 We continued our NYC experience by taking a subway ride down to Chelsea so that we could stop at Doughnut Plant before heading over to The High Line. 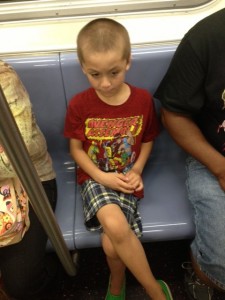 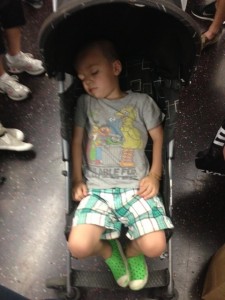 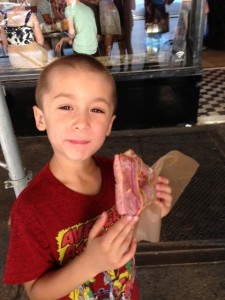 Energized with sugar tinged doughnut flavors like Tres Leches, Rainbow Raspberry, Creme Brulee and Lavender, we headed toward The High Line to make our way to Chelsea Market via sunlight, native grasses and flowers and Mexican Popsicles, rather than oppressive heat and the delectable odor combination of dead rats/urine/BO that marks any walk along a NYC sidewalk in summer. 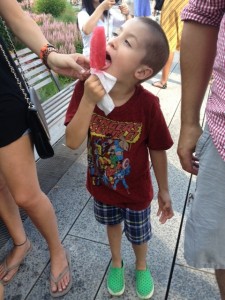 And were finally met with the cool indoors and food aromas of Chelsea Market. 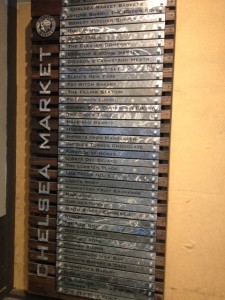 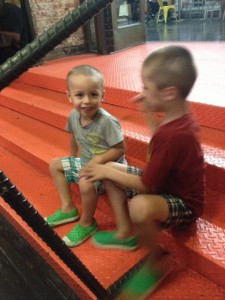 We showed our family all of our usual favorite haunts, which included the kitchen supply store (Insider Info: Apparently after 3 pm their bakery closes and there are bags of bread out on the counter for customers to take for free.  It was the best rosemary roll I’ve ever had and a pretty good whole wheat baguette to boot!)  Then we all poured into The Filling Station, where we put ourselves into a vinegar and salt coma/craze from our tasting frenzy  (boys = craze, adults = coma/vinegar sweats) and left with plenty of containers of truffle salt, Ghost Pepper salt and pomegranate and apricot vinegar.

After being overcome by the spices in one of the stores in Chelsea Market, several people in our group requested Indian food for dinner but the best place my husband could find was down in the East Village…21 blocks away.  I had a bad feeling because I have learned that any time you make a decent-sized trek for a specific restaurant which you have never tried before, it somehow never meets expectations.  Long story short, we ended up at some tapas place in the East Village instead and it was pretty horrible on all fronts.

A subway ride back to Brooklyn, a buffalo chicken pizza from our local pizzeria and a few six-packs of beer (plus a pint of ice cream for the boys and I) and we were all happy campers again once we reached home.

Should have just gone with the pizza all along.

Somehow, it still all seemed perfect.  We went to new spots and old favorites and even managed to have some classic New York experiences like failing to find the right place for dinner, despite there being more than 4,200 restaurants in the city.

Sunday involved brunch at Westville in the West Village, where we devoured perfect egg dishes and a multitude of market sides made with every type of vegetable you can imagine.   Then we checked out the Pride Parade, which felt very poignant, considering DOMA had been overturned two days earlier.  There were certainly plenty of flamboyant characters in mesh and sparkles,  but the parade itself seemed much more subdued – comprised of many politicians, large companies such as Coke and AT&T, and floats that celebrated groups like SAGE (Services and Advocacy for GLBT Elders) with many older couples being cheered so loudly it brought tears to my eyes.  The whole thing gave me chills – in a good way – and I am so happy that we were able to be there with family and the boys to witness a celebration that had such added meaning this year. 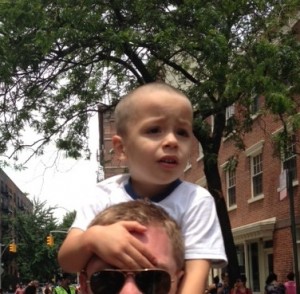 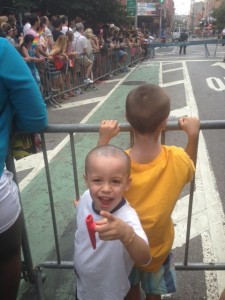 The rest of the afternoon was spent making snacks and relaxing at home while watching Wreck it Ralph until the tias and tio needed to journey back to Maryland.

Even though Monday through Wednesday was comprised mostly of me packing while the boys watched enough TV to make their brains truly turn to mush, we did sneak in a few more goodbye activities.  In between doctors’ appointments in the city, we visited The Museum of Natural History, since the ‘Dinosaur Museum’ has long been Carlitos’ favorite (and I think it’s quickly growing on Xavi, too). 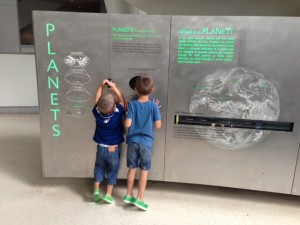 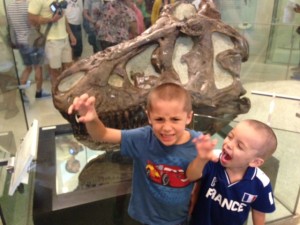 And on our final day in Brooklyn, we took a packing break to walk to our neighborhood deli for sandwiches which we took to our local playground for lunch.  The boys had time for a few figure eights through the sprinklers and attempts at the monkey bars, before we headed back home.  We indulged in one final ice cream from our Italian Ice shop to keep us cool as we walked back. 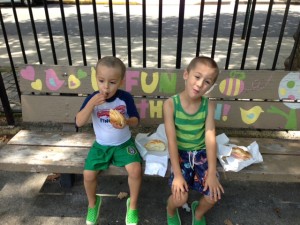 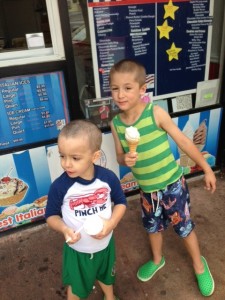 The final week in Brooklyn was entirely bittersweet.  Again, we really aren’t moving very far and to be honest, none of this is the life I anticipated in any way, so it isn’t as though we are leaving a life I had always envisioned.  But we have made the best of our time in NYC and Brooklyn and somewhere along the way that turned into genuine love for the people and places that make New York what it is.  I sometimes forget that even though living in New York was a blip on the screen for my husband and I – as seasoned gypsies – it is where Carlitos has lived most of his life, and Xavi all of his.  It makes me feel at peace knowing that they had the send off they deserve as we depart from what they know as their hometown.

Even if I know we will be back often to visit both friends…and decent bagel shops. 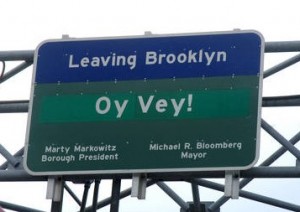