And Time Marches On

Posted by RealMommyChron on September 18, 2012

We spent two fabulous weeks gallivanting around the Mediterranean with our extended family, my father-in-law as host.  It was amazing.  A trip we will never forget.  And one that I am sure I will do a photo post about sometime soon. (‘soon’ being November if you know me at all)

Then, we returned last Sunday night and I immediately became engulfed by a sinus infection that had me truly believing my cheek bones just *may* be fractured and my top row of teeth all suddenly needed root canals.  My face was in a lot of pain.  And then my throat, followed by my head and most recently, my aching chest, which is doing its best not to cough because it is aware just how bruised it will feel after each coughing fit.

It has been lovely.

Typically, either of these items could be the basis for a babbling blog post.  But right now there is something else that is filling my brain and clenching my heart.  Something that needs to work itself out of the twisting, conflicted residence it has set up inside of me and find it’s way through to my fingertips before I can wax poetic on subjects like gondolas or phlegm.

This is something he has been looking forward to for years.  Literally.  Perhaps it is something he has been intuitively looking forward to his whole life.  We are talking about the child who forsook balls and cars for letters and numbers at 18 months of age.  The child who loves workbooks.  Who possibly loves them more than ice cream.  The little boy who, when he learns the definition of an island, squints at you and starts asking questions about what surrounds continents (knowing full well the answer is ‘water’), quickly leading you to a conundrum yourself as you try to clarify why an island is unique when all land masses on the planet are, at some point, surrounded by water.

Yes, the child that more often than most of us would like has us saying, “I…I’m not sure.  I had never thought about that.  I’ll get back to you.”

So, on the one hand, I am ridiculously happy for him.  He is finally embarking on his educational journey through the school system.  He is finally reaching a milestone he has been yearning for and dreaming of and wanting so badly he could taste it.  He has arrived.  He has begun.

And he is loving it just as much he thought he would and as we wanted him to.  Every morning he has woken up long before necessary – showered and dressed hours before we need to leave the house.  When we arrive at school I have to remind him to give us a hug and say goodbye, rather than sprint straight into the classroom.  At pick up his first words are asking to go to whichever playground his ‘school buddies’ are heading to that day or about setting up play dates.  When a girl was crying on his first day he came home and told us, in complete disbelief, “Isn’t that the craziest thing you have ever heard?! She was crying! In kindergarten!  Kindergarten is the BEST thing EVER!  Why would you cry?!”  Meanwhile, a deep grin hasn’t left his face all week.  I am sure his cheeks will be in some pain this weekend once he finally relaxes them.

How can I not be happy for him?

I don’t even quite know how to describe my ‘on the other hand.’  I suppose it’s sadness.  I mean, the tears we held back that first morning (and by ‘we’ I mean my husband and I…certainly not Mr. Kindergartener, himself) would lead you to believe so.  But it feels more complex than that.  I feel heavy, knowing that things will never be the same again.  That this is different from his other milestones thus far.  This one is a milestone that will never stop, never end.  It is a milestone that marks the beginning of a path that he will continue to march for the rest of his life.  A path farther and farther away from me.  I know that sounds immature and selfish, but it’s true.  I want him to grow up, be independent, happy, make a life for himself in a strong, sturdy and self-sufficient manner.  But that doesn’t mean that watching him start down that road doesn’t sting a little.  And by ‘sting a little’ of course I mean make my heart ache with a longing that I can’t even verbalize because I don’t even truly know what I’m longing for.

I guess I’m longing to hold onto every precious moment of his short life so far and hold onto him before the outside world begins altering him little by little.  He now spends six and half hours every day with new people and returns to me with new fart jokes, facts, and mannerisms.  I understand that this is life and that I can’t actually hold onto my kids exactly as I have raised them and as I know them forever.  I am not delusional.  But it doesn’t mean that a part of you doesn’t want to do that.  Because it does.

Each day he has returned to me a little less mine.  A little more him.  Able to pick and choose tiny body movements or word choices garnered from friends, teachers, lunch mates.  Using his 4-year-old whims to figure out where he wants to lead and where he wants to follow.

I feel myself tuning into him with all that I have.  Listening to every word, story, laugh, new piece of knowledge.  I am no longer playing the ‘mmm-hmm’ game when he speaks.  I am digesting this new little being.  Getting to know this slightly new him and love him because of who he is, and not just because of the intense bond between a mother and her baby boy.

I wonder if this is how it will always be from here on out, or if it is just an over-dramatized reaction on my part during his first week of Kindergarten.  But one thing is for sure, I miss my little partner in crime.  Chatty, chatty, we would definitely always get caught if we were actually trying to get away with something, partner in crime.

His brother?  He is missing his best friend.  It is pretty hard to watch.  But he is being plied with candy, scooters, skateboards, and the old Xavi standby, balls.  Plenty of balls. Oh, and he is talking up a storm.  Must suddenly be more air in the room or something.

In honor of my first born heading off to school, I took a little trip down memory lane.  Meaning, I watched the Mac slideshow of (literally) 8,000 photos played to that default song they have set up to make you cry at just about any photo.  Do you know the one?  The one that could make you cry at a picture of french fries?  And then I chose out a *select few* (cough…hundred) to share with you. 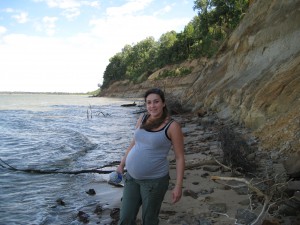 To begin with, in my defense, he was the child who made me a mother.  And furthermore, he spent 10 months inside of my body.  I grew him.  Like a chia pet or a watermelon.  That makes for kind of a ‘bonding moment.’  Even stronger than waiting in line next to someone for 10 hours to get into the midnight screening of Harry Potter: Deathly Gallow Sallow Something or Other.

Then we bonded immediately after birth when he had to go to NICU and I to emergency surgery.  Look.  I am so infatuated that I don’t even mind someone taking a picture of my nerf ball of a face. 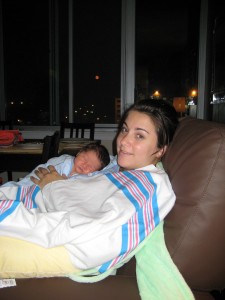 We were both so happy to be home.  But then we seemed to spend the next 21 days or so crying all day.  Yes, we. 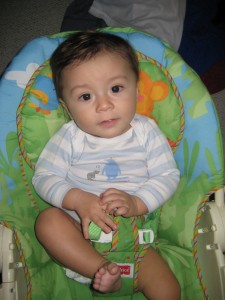 I am so happy to now know that we didn’t cut all of those neck holes for nothing.  His gigantic head apparently holds a gigantic brain! 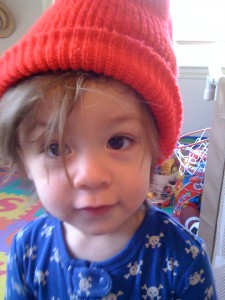 Little know fact: In the original original Shameless the baby brother was actually the drunk main character.  And Carlitos played the part. 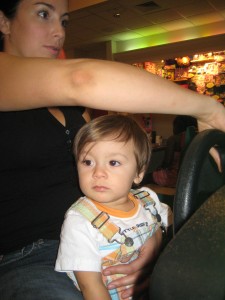 Carlitos’ existence led to a lot of fun new firsts for me, like Chuck E Cheese, for example.  Admittedly, while being a bonding moment for both of us, I *may* have been having more fun than he was. 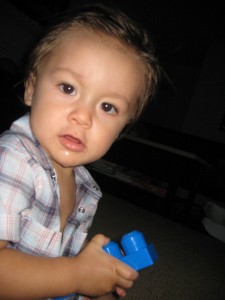 He was the kind of baby that you had no choice but falling in love with. (What? That’s what all moms say? Nahhh.)

The kind of baby who could pull off a full soccer uniform and ponytail at age 1. 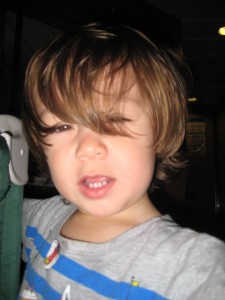 The poor kid who has to deal with ‘guinea pig syndrome’ as his new (moronic) parents figure this whole ‘parenting’ thing out.  (We fought so hard against the grandparents when they told us to please cut his hair so it wasn’t in his eyes.  We clearly had some denial issues going on.) 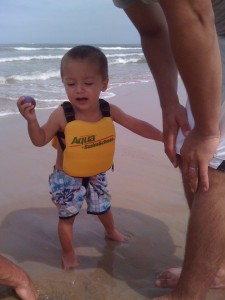 And who HATED the feeling of sand on his feet. (This is where I briefly wondered if he had my blood.  Thankfully, he outgrew his dislike of the beach.) 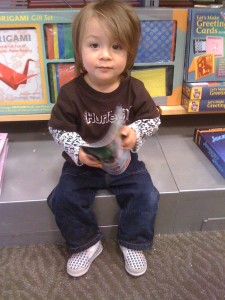 But never stopped smiling whenever we took him to bookstores. 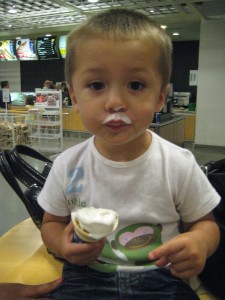 Carlitos experienced our move from the ‘burbs to Harlem when he turned two and adjusted like a champ.  Ikea ice cream helped.

As did Coney Island corn dogs. 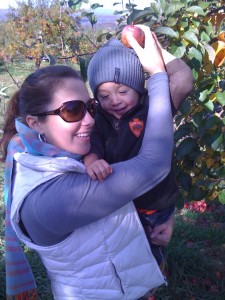 And now living in the best apple picking state in the country! 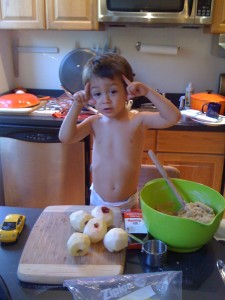 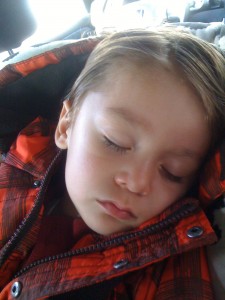 And suddenly remembering that he was just a brand new little toddler. 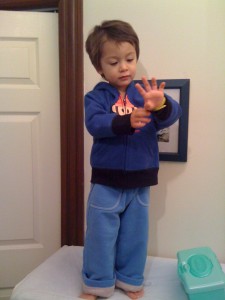 No matter how old he would always try to convince he was. 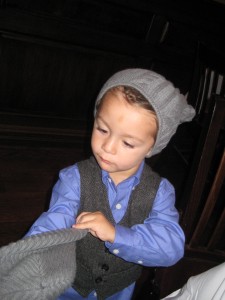 He has always been a child so happy and adaptable to change that he understood New York fashion much faster than I did. 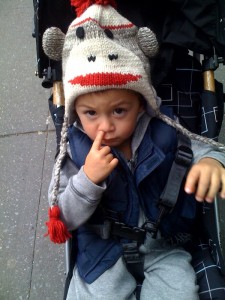 And the New Yorker mentality, too.

And then suddenly he turned into This Guy.  A creative, self-confident, goofy, smart as heck 4-year-old, ready to conquer the world.

This entry was posted in Mommy: just showing some baby love, Real: my personal trials, tribulations and tales and tagged Brooklyn, Carlitos, Growing up, kids, Kindergarten, motherhood, New York, time flies. Bookmark the permalink. Follow any comments here with the RSS feed for this post. Post a comment or leave a trackback: Trackback URL.

20 Responses to And Time Marches On