They Don’t Call ‘Em the Trenches for Nothin’

I hired a babysitter today so that I could work with a client, get some food shopping done and, as it turns out, even have a few extra minutes to fill the car with gas and get my eyebrows done.  Success!

The spa, it was not.  But honestly, a few hours alone – even to run errands and work – can sometimes feel pretty relaxing.  It seems like such a treat because it is hard being a working/stay at home mom.  Yes, I adore my kids.  Yes, they are relatively well-behaved. (I believe the babysitter’s exact word was ‘angels.’  Had to throw that in there.) Yes, we do tons of fun stuff.

However, being ‘on’ every minute of every hour of every day can wear you out.  As you may have heard other parents say, ‘We don’t even get to be alone while peeing.’  Truth.

But I have to admit that I forgot that this isn’t the most exhausted I have ever been.

At the grocery store today, I ran into a dad from our neighborhood.  He was alone, too, but he didn’t have the little skip in his step that I did.  His eyes were bloodshot, his shoulders drooping.

As soon as I asked how things were he didn’t hold back:

Life is crazy.  No sleep, house is a mess, everything is in chaos.

Oh, that’s right! You guys have a new baby, don’t you?

Yeah.  Eight weeks.  Did your older son regress when his brother was born?  Develop separation anxiety?

That’s totally normal.  It will get better.  I promise everything and everyone balances out and it will be okay.  Gosh, I forgot how rough it is at first.  And nobody is still hanging around to help after the first week or two.

Exactly.  We have no family around and, and…this is just so tough.  I just want a shower.

How could I forget so quickly?  The extreme, painful fatigue, mood swings, sadness, filth, messiness, fear, stress.  Sounds fun, eh? Of course there is the fresh, intense love washing over you for this little being, the tiny milestones each day and week.  The peace you feel in your heart when you watch them sleep with pursed lips and arms above their warm little heads.  There is heaven in being with a newborn.

And there is also Hell.

Or at least, there was in our house. It was tough and messy and exhausting in a way you never knew existed.  The truth is, I haven’t forgotten what it’s like.  The disbelief that it is so difficult just to fit in two showers a week or wash the dishes…ever.

But perhaps other things have clouded my perception of what is like for the average person to have a new baby at home.  In NYC, it can actually be quite common for people to hire baby nurses to live with them from the time the baby arrives.  Yes, 24-hour-a-day help.  Throw in a live-in nanny?  C’mon now, those families simply aren’t having the same experience we had.  I’m not saying they are bad or uninvolved parents, but I am saying they probably looked more well-rested than we did and perhaps you could see their living room floor without pushing aside burp cloths, diapers, dirty dishes and toys.  Perhaps.

And then there is Facebook.  According to Facebook, we were pretty much the biggest failures ever.  Somehow everyone I know who has had babies in the last five years or so has uploaded the most magnificent photos of their baby, themselves and their homes within weeks of giving birth.  I am praying that outside of the frame lies a mess as impressive as ours was, but who knows.  I am hoping that there was some good lighting, angling and even photoshopping to make the moms look that tiny two weeks after giving birth, but who knows.  I am thinking that maybe they have wrapped their baby in a towel and made a makeshift crib at some point when they realize they forgot to pack a blanket and the pack’n’play, but who knows.

I do know that our house was a disaster. 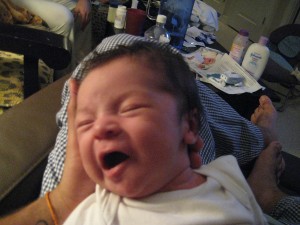 (If you look closely, you can see that we actually had a visitor with our house in that state. Embarrassing.)

I do know that I looked like, well, I had just gained 65 pounds during pregnancy and lost ,oh, about 8 of those pounds in the days after giving birth.

(About three days post-partum…eating sushi! My joy in this photo outweighs well…my weight.)

I do know that we did some crazy things when we mis-packed, mis-judged or just…messed up. 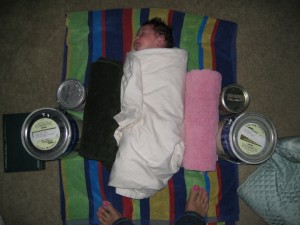 I also know that it was such a relief to hear this dad say those things.  I wasn’t happy that he was suffering, but I was happy to hear that we hadn’t been alone.

And thankfully, he was talking to someone who understood where he was standing.  Because I was able to tell him, “It gets better.” (Yes, I think we need to share that phrase.)  New parents need to know that the joy and love remain just as strong, but the living part?  That does get better.  Easier. Which I wouldn’t have even been able to tell this neighbor if he hadn’t been so honest about his current reality.

Horizontal stripes and a cupcake? Yup.  Proudly, it seems.  Thank God I didn’t live in NYC or use Facebook during my first pregnancy.

It really does, it gets better.

This entry was posted in Real: my personal trials, tribulations and tales and tagged baby nurse, exhausted, Facebook, live in nanny, messy, new baby, newborn, no showering, no sleep, reality, trenches, truth. Bookmark the permalink. Follow any comments here with the RSS feed for this post. Post a comment or leave a trackback: Trackback URL.