Posted by RealMommyChron on September 30, 2010

Okay, here is the meat (I keep telling you, yes puns are ALWAYS intentional) of the story about how to throw the raddest Dinosaur Birthday Party in existence. (I’m sure there were way cooler ones before dinosaurs were, you know…EXTINCT!)

And obviously what I really mean by the ‘raddest Dinosaur Birthday Party in existence’ is the ‘raddest Dinosaur Birthday Party I could manage throwing in our New York City apartment, on a budget and with the birthday boy and his 5 month old brother in tow.’ Thankfully, we have the BEST friends and family in the world who helped out a ridiculous amount with everything.

Alright, for full disclosure, I did start planning this party over a month ahead of time. Partly because I love planning parties and partly because that helps with the cost because you have time to shop around and find the best prices…and to wait for your Oriental Trading package to come in, of course. But I’m getting ahead of myself.

Oh, and the theme came about because I asked Carlitos what he wanted and he told me “orange, brown and green.” Um, Carlitos those are colors, not a ‘theme.’ He repeated them. So I asked if he meant dinosaurs (since those are their colors) and he said ‘yes.’ That was enough for me. My mind started racing, trying to come up with as many cheesy plays on words involving dinosaurs as I could.

I used a website called www.Pingg.com for the first time and sent out the following FREE invitation:

‘Make no BONES about it, Carlitos-saurus LOVES dinosaurs! Please join him for a rip ROOAAARRING good time to celebrate his 3rd birthday in his CAVE. Don’t be EXTINCT, STOMP on by! Hosted by: His Prehistoric Parents, Annie and Annie’s Husband’ (That was a close one. Almost wrote his name.) I loved this website for several reasons, one being that I can see when someone has looked at the invitation.

Oh, you didn’t RSVP because you didn’t see it??? Yeah, methinks not! Caught you red handed! Down on the floor, mister!

Next, I did some shopping at Oriental Trading and at Michael’s. Really, there wasn’t much other work to be done ahead of time. I did mention to my mother-in-law what I would be making as food and beverages and…BADA BING! Mother-in-law is in charge of food and beverages for the 36 adults. I still covered the four kids. So, I guess you could call that something I did ‘ahead of time’?

Actually, Carlitos and I did make Dinosaur Eggs ahead of time. I bought a pack of orange balloons at the dollar store and blew up three of them. We made papier mache eggs by cutting colored construction paper into strips, dipping it into a flour/water mix and laying them on the balloons, covering about half of the balloon and leaving the edges jagged.

These were really fun to make. I didn’t have a clue what I was going to do with them, exactly, but I knew they would come in handy for something cool at the last minute. Only, they didn’t. So they were just random decoration. If you make these at home and think of a creative use for them, please let me know! 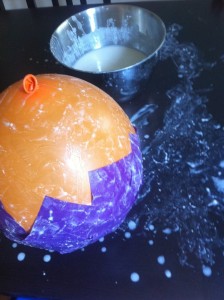 Fast forward to the day of the party. I enlisted grandparents, aunts, and friends. Someone ran to the dollar store to buy two mylar balloon and get them (and the left over orange balloons) filled with helium. 50 cents each! Not bad. Then they also drew dinosaur footprints in chalk coming up the sidewalk and our front steps. I forgot – we did also cut out dinosaur footprints ahead of time and on the day of the party we put them going up the stairs and walls as you walked up to our apartment. Pteranodon footprints mind you – hence the ability to leave footprints on walls. 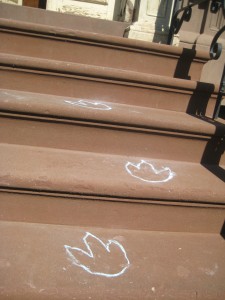 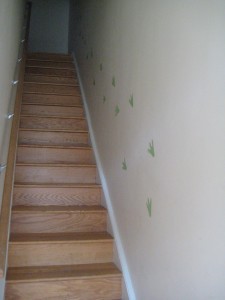 I spent my time setting up the activities for the kiddies. First was a dinosaur skeleton excavation. My sisters-in-law brought empty shoe boxes, my parents brought sand, and I purchased the skeletons from Oriental Trading. I just laid the two skeletons in the bottom of each shoe box, covered them with sand and put out brushes I got from Michael’s. 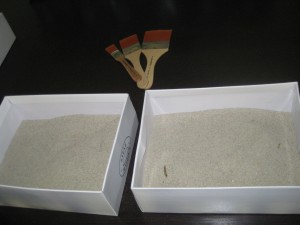 I also set up a table for two separate arts and crafts activities. One was a fossil-making activity. I already had some fast-drying molding clay and my parents brought seashells and stones. Each child just pressed different objects into the clay to make a ‘fossil.’

The other activity at this table was painting. No, I am not insane. Yes, painting. I found wooden dinosaur pins at Michaels for, like 10 or 30 cents or something. I bought the pin backings there, too and just glued them on and wrote different dinosaur names on the back. (One of them was indeterminable, so we named it the Carlitos-saurus) 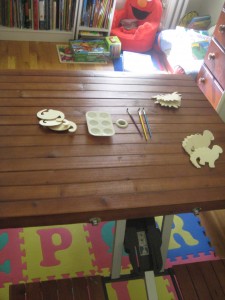 I also took out some dinosaur books from the library, paired them with our own dinosaur books and created a little dino-focused reading nook for kids who needed a breather.

Next I hid some ‘Dinosaur Eggs’ around the house. I just put some tiny plastic dinosaurs (96 count from Oriental Trading. You may remember them from Carlitos’ Birthday School Cupcakes) into some leftover Easter eggs. 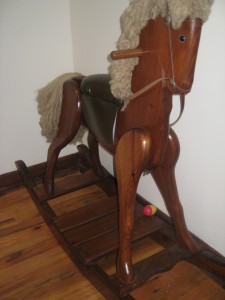 Finally, I made the gift bags. I bought the bags themselves from a party store and set it up so that the kids were given their bags as soon as they got there and used them for the different activities. (Example: Tiny paintbrush for the detailed excavation and for the pin painting) They also got to keep everything from the activities and won prizes for each activity, so this way they could put stuff (skeletons, dinosaur eggs, fossils, etc.) in their bags. The bags also had foam dinosaur masks, dinosaur stickers, lollipops, dinosaur ‘grabbers’ and more little plastic dinosaurs (all from Oriental Trading…except the lollipops. Those are from my mother-in-law.) 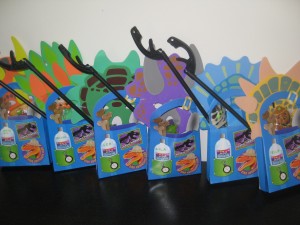 Other people were in charge of creating Carlitos-saurus Cave, where people could leave cave drawings (i.e. birthday messages) for Carlitos. It was just craft paper taped onto a huge appliance box my parents brought. It turned out wayyyyy better than if I had done it! 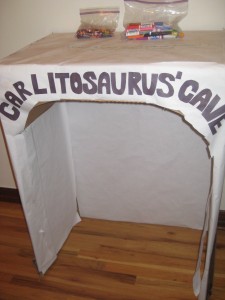 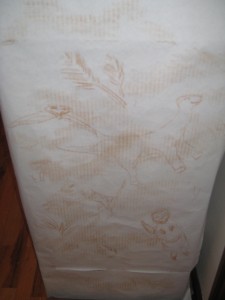 I left someone else with the rolls of crepe paper, expecting to come back to a few twirls across the ceiling, but instead came back to this amazing (prehistoric?) tree and volcano mural!

And like I said, when my mother-in-law heard that I would be serving ‘Lava Punch,’ chicken nuggets (Stegosaurus Spikes), Edamame (Pteradactyl Toes), and the such, she quickly offered to whip up some ‘adult’ food. Thankfully, she is a bit of a magician in the kitchen, so there was plenty of delicious food for the (kind of insane) amount of adults at my son’s 3rd birthday party. In addition to helpful, we also have very generous friends and family who brought tons of beer and wine. We also had a variety of Hint Water flavors to choose from, as they so kindly gave us a few cases for the party. (That right there, my friends, is an ‘inserted disclaimer.’ Just to be abundantly clear: The Hint water was given to me for free, so keep that in mind as I speak about it…but also keep in mind that I probably wouldn’t say anything at all if I didn’t have something nice to say, since I am not legally bound to mention them or anything. Capiche?) So, anyway, the water was a hit as far as I could tell. My favorite flavor was definitely the blackberry, although I heard lots of people say they loved the pomegranate-tangerine and the raspberry-lime. Slight flavor, no chemicals, no fake sugars or sweeteners and no calories? Yes, please! Perfect for those of us trying to be healthy in the ‘skinny’ type of way, but also healthy in the ‘I would love to stop putting so many deadly chemicals in my body daily’ kind of way. 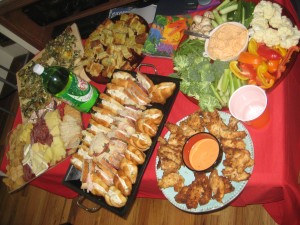 So, where was Carlitos while all of this set up was happening?

He was at ‘The Dinosaur Museum’ (Museum of Natural History) with his daddy, of course! They came back just in time for the BIG DINOSAUR PARTY!

Once the party began I jumped right into the kids’ activities. Then I went around and took each guest’s picture in this: 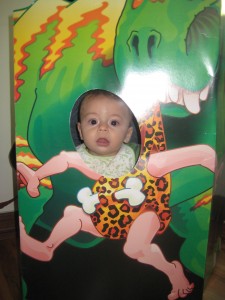 I got it from Oriental Trading and it is actually wider, but I think someone had a hard time holding Xavi’s face in the hole AND holding up the cardboard. In any event, I glued each guest’s photo onto their thank you card and wrote “I got carried away at Carlitos’ 3rd birthday party!” or “I had a Dinomite time at Carlitos’ 3rd birthday party!” on them.

Oh, the cake! I almost forgot about the cake! Costco, people. Costco. The cake was amazing. White cake, cheesecake filler frosting and chocolate butter cream on top. They wrote out my WHOLE message, and the cost? 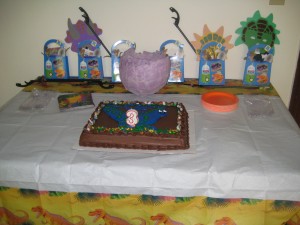 (Please note the papier mache dinosaur egg placed as a random decoration. Honestly, if you think of something more creative to do with these I really want to know!)

Oh! Annnnd, I forgot that I bought these cute ‘stone/rock’ chocolates at Marshalls that we put around the edges of the cake. Yup, I’m just a regular ol’ Sandra Lee. 70% 30%, baby! 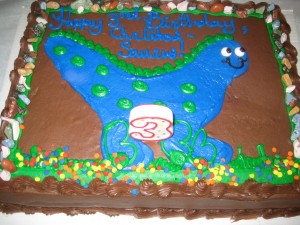 So, there you have it. The Longest Post I Have Ever Written. It’s not really my fault though, because I kept being told that I HAD to write about all of the details of this party and, well, I guess there were more details than I realized.

But, let me tell you, it was so worth it. Watching Carlitos light up at every activity and detail made me so happy…and hearing 40 people who love him and care about him singing happy birthday to him?

That almost made me cry. 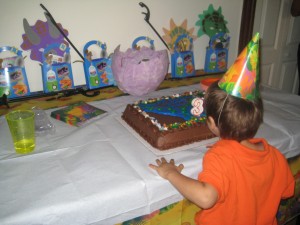 This entry was posted in Real: my personal trials, tribulations and tales and tagged 3rd birthday, Dinosaur Birthday Party, Dinosaur cake, Dinosaur decorations, love. Bookmark the permalink. Follow any comments here with the RSS feed for this post. Post a comment or leave a trackback: Trackback URL.