Posted by RealMommyChron on September 26, 2010

Friday was Carlitos’ 3rd birthday and the day began with much restraint, as you can see.

My friend and I made the cupcakes the night before, but Carlitos was very instrumental in aiding me with the cupcake decoration on his actual birthday.  I would frost them, roll them in ‘volcanic ash’ (crushed Oreos) and then he would place the dinosaur on top.

Without touching, tasting or licking any frosting.

His self control was admirable, so I rewarded him with ‘Breakfast Dessert’ in the form of a mini cake. 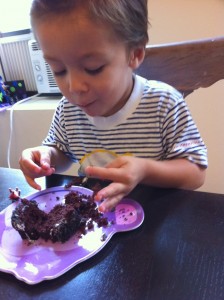 We finally finished the cupcakes and I noticed they all seemed to be in awe of something or someone.  Either that or they had a pretty substantial staring problem. 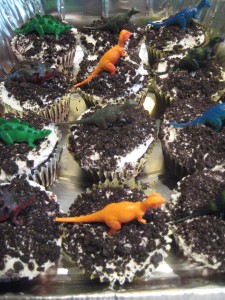 What do you see?  A meteor?  Giant walls of ice?  Erupting volcanoes? 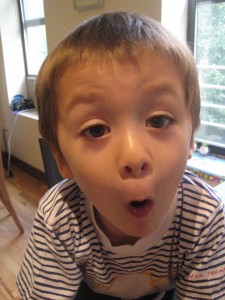 Oh, phew.  Just The Birthday Boy.  But I can totally see why you’re staring.  Carlitos, stop it right now or your face will stay like that!  Clearly, Cake #1 has already kicked in.

Then the arrivals began.  I should mention that Carlitos is the first grandchild on both sides AND really the first child out of our main group of friends.  Basically, it isn’t unusual for him to be treated as a king.  As such, he is sure to have a multitude of visitors on such important days as his birthday.   By 10:30 am, his Godfather, one set of grandparents and a family friend had all arrived.  When we ALL took him to school a little later, his Tia met us at the school.  Mind you, other than the Godfather, all of these people drove up from Maryland.  So, Carlitos and his entourage headed into school with his Dino Cupcakes and his special book that they donate to the classroom in his name. (school tradition) 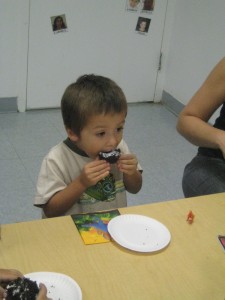 He devoured Cake #2 while listening to the story.  You’ll notice there is nary a crumb left on that plate.  I have to admit, the cupcakes were crazy good.  I had extras and offered them to the parents when school let out.  One mom came back for seconds.  That just doesn’t happen in NYC.  They were that good.

After school we waited for my husband to get home from work and then all went out to a fabulous Italian restaurant, Max Soha.  I enjoy Italian-American food and all, but this place truly tasted Italian and I was in heaven.  As was the Birthday Boy, who happily twirled (and practically inhaled) his fettucini al funghi and then moved on to Cake #3. 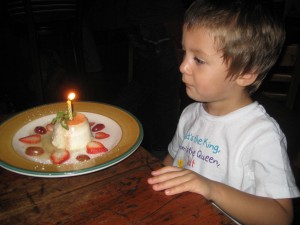 Well, okay, not cake, exactly.  But worthy of a candle and, I believe the third rendition of Happy Birthday that day.  I was so excited to have some panna cotta, because I was certain he didn’t have any room left. 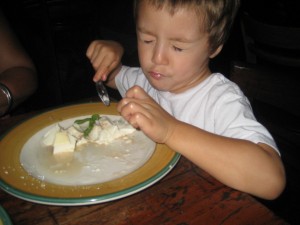 Sometimes I misjudge a situation.  The above photo is the face he made when I asked if I could have a second bite.  Luckily, there is at least one more birthday cake to come, of which I am pretty sure I can have a slice.

Yes, this may conclude the actual Day of His Birth festivities, but there is much more to come in Dinosaur Birthday Part II…

This entry was posted in Real: my personal trials, tribulations and tales and tagged Age 3, Birthday, birthday cake, Dinosaur, school cupcakes. Bookmark the permalink. Follow any comments here with the RSS feed for this post. Post a comment or leave a trackback: Trackback URL.

One Response to Dinosaur Birthday – Part I