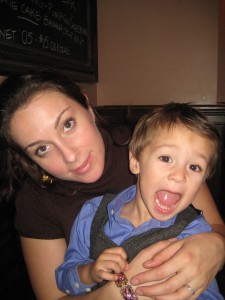 I am a 29-year-old Wife and Mom. My ‘main identity indicators’ used to include Educator, but since moving to New York last August I have been an honest-to-goodness Stay At Home Mom. This is largely due to the fact that upon moving to New York (as in literally 5 days after we arrived) we found out I was pregnant with number two.

Guess what? It is somewhat difficult to find a new job with a tell tale baby bump.

So, I have spent these past months shuffling Carlos Eli to and from ‘classes’ (Say what?!? He’s TWO!) and exploring NYC and its outlying areas.  I have also spent it GROWING A HUMAN BEING INSIDE OF ME.  Sorry, I don’t know how to share that information without yelling it.

I also have a husband, however, you will not see his name or face on here.  He said I could write about him and our relationship (this is HUGE for The Most Private Man in the Universe), but requested that he remain invisible.  This is called Compromise and it is one of the many tools we employ to do our best to make it to our 60th wedding anniversary.  That’s the ‘Diamond Gift’ year and I assure you I plan on reaching it.

The newest member of our family, John Xavier, arrived on April 15 (Don’t you dare…don’t say it…I don’t want to hear it…Yes! Fine! He is a ‘Tax Baby.’ Ugh.)  I now spend a little less time carting Carlitos to his activities because Xavi is constantly eating and I just can’t do it all,  people.  Plus, I am pretty sure driving while nursing is illegal.  Hard to do, at the very least.

In any event, in adjusting to a new city, a new role and a second pregnancy I found that I suddenly had lots to share.  My poor family started receiving multiple photo and email updates daily and I became one of “those people” on Facebook.  Do I really think anyone needs to know that I am baking Easter cookies with my son and ate half of them? No. Did I share that information on Facebook? Of course.

In other words, it became painfully clear that I needed some other outlet.

Also, while I would definitely put myself in the I Can Admit I Am Completely Flawed As a Wife and Mom category (hence the ‘Real’ in my blog title), I am not above admitting that I would LOVE to be a perfect wife and mom.  I know it’s cooler to, well, play it cool, but I am just not that cool.  There’s no shame in acknowledging those times when you attempt to get everything right…and actually do!

Again, that clearly isn’t the norm in our home or else this would be PerfectMommyChronicles (don’t worry, it doesn’t actually exist – I checked)…and how boring would that be?

13 Responses to About Me