The writing’s on the fridgehlater

Posted by RealMommyChron on September 17, 2010 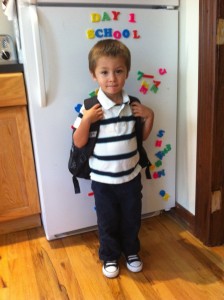 Anyone else?  Heart melting?  Or just his mama?  Yes, my baby boy…or rather, my Big Boy, started preschool this week.  This means he is truly growing up.    And as I asked him to stand in front of the fridge for a picture, he told me, “Write ‘school,’ mommy.  On the fridgehlater.  School! Fridgehlater!”

And that is the story of how the World’s Cutest Photograph came about.

But let me go back a bit to the Breakfast of Carlitos’ First Day of Preschool.  (Yes, everything was a very important event on Monday.) 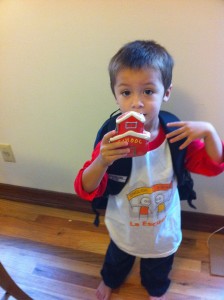 As soon as he woke up, he wanted to put on his shirt that the school had sent him over the summer.  I made special hotcakes and had a schoolhouse cookie waiting for him at his seat, along with a new backpack (that he can actually wear without tipping over backwards), a new lunchbox (that I purchased, along with boxes and boxes of snacks and juice boxes from Costco…before I remembered that he goes to school after lunch.  Go me.) and a card.

Ohhh, the card.  I thought my husband was going to love it.  He loves irony and he loves for things to happen organically.  He never likes fake or forced.  The man gave me a Mylar balloon (uninflated) with the words ‘Happy 60th Anniversary!” crossed out and “Happy Valentine’s Day!”  written to the side of it because it called out to him and felt right.  (Don’t worry.  Although blind with infatuation at the time, I have long since figured out that he actually just waited too long and that was the only balloon left.)  This was for our first Valentine’s Day together.  After dating for less than a month.  Oh, and the gift included two dead roses in a box – but that’s a story for another day.

In any event, I found this card with Darth Vader on the front that said, “Come to the dark side.  We’re bored.”  The inside said “Choose your friends wisely.”

I thought it was hysterical.  I was sure my husband would die laughing.  He read it and looked at me, who was looking at him expectantly with my eager eyes and smile ready to burst.

He just shook his head.  And practically in unison he and his mom said, “Annie, what is wrong with you?”

Oh.  So that’s how this is playing out, huh? Okay.

Well, I still think it is hysterical.  And I am hoping that Carlitos Eli has my sense of humor so that when he reads it when he is older he will laugh with me.  I’m pretty sure he will.

Fast forward to our arrival at school that afternoon.  We had been taking pictures all morning, having ‘special’ breakfast, ‘special’ lunch, Carlitos received ‘special’ shoes.  Basically, there was this huge build up.  In fact, the only reason my mother-in-law was visiting was for this momentous occasion.

So here he is, ready to go in to school for the first time: 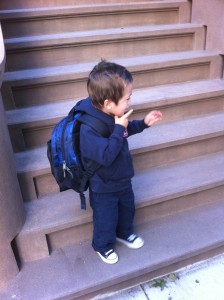 And here he is mere milliseconds later: 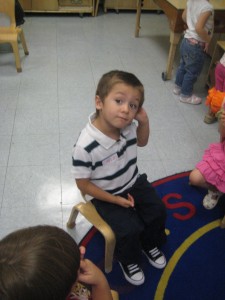 Yeah, that child pretty much sprinted inside and then ran straight into the classroom as soon as they opened the door.  His Mima and I had to go over to him (already in his chair) and ask for a kiss goodbye.

Poor Mima.  I kind of  knew that this was how it was going to play out, but I think she had envisioned something a little more dramatic, emotional, climactic…sooomething.

Maybe in a few years Xavi will give us some of the weepy leg-clinging a part of me was secretly hoping for.

This entry was posted in Real: my personal trials, tribulations and tales and tagged first day of preschool. Bookmark the permalink. Follow any comments here with the RSS feed for this post. Post a comment or leave a trackback: Trackback URL.