We had our first “Family Vacation” now that we are a family of FOUR. (Coincidentally, this trip coincided with Xavi’s four-month birthday. Awwww.) My husband had Friday off so I did TONS of research and decided on Montreal for our three day weekend getaway. 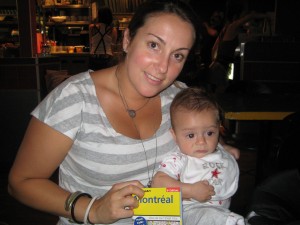 Ooh la la! Our first family trip and we head to a foreign country?! Okay, okay so Canada doesn’t always feel so foreign, but technically it is. It is really only a six hour drive from New York City, so we didn’t need to buy airplane tickets. Then, I found a four star hotel for $90 a night through a last minute travel site. Um, you can’t stay in a hostel for $90 a night in New York City, so I was pretty proud of myself.

Plus, this would be the first time going to Montreal for all of us.  What an adventure! Actually, I technically went there with my French class in 7th or 8th grade, but my memories consist of  a horse and carriage ride, the cold, and what boys I liked at the time.  Being a teacher myself, I now realize how much planning probably went into that trip.  I’m sorry, Mme. Jacquart.

So, we decided to leave at 3:00 am, as we now do, and get to Montreal with the whole day ahead of us on Friday.  We overslept and left three hours late, but still, a 6:00 am departure isn’t half bad, right? We arrived in Montreal in time to have poutine at La Banquise and walk through Parc La Fontaine.  Interestingly, La Fontaine was PACKED with people playing guitar (a constant theme in Montreal, actually), reading, napping, smoking pot (another constant theme in Montreal)  and just generally relaxing.  Wait a minute?  Isn’t it Friday?  Work days in Canada look awesome.  Well, my prudish self is not actually into doing drugs, but the rest looked cool.

We walked all around the downtown/McGill area and then had dinner at a French restaurant on the pedestrian part of Av. Prince Arthur.  We bought dessert crepes at another restaurant and ate them in a little park. $16 later (for TWO crepes)…um, yeah.  This would be a good time to mention that Canada is NOT cheap for Americans right now.  For the entire first day my husband was convinced that the exchange rate must be 2:1 (in our favor).  I kept saying I was pretty sure it was more like 1:1.  I was right.  I mean, not that it matters who is *right* when you are in a mature, loving marriage.  But, I was totally right.  I’m just saying.

Then we bought a bottle of wine to bring back to the hotel room since the boys needed to go to sleep and we weren’t ready to go to bed yet…or were we?   Yeah, we totally got back to our hotel and realized we were way too tired to have a glass of wine.  Oh, the exciting nightlife of a couple with two young kids.

On Saturday we slept in – meaning we got out of bed at 8:00 am.  We took a leisurely stroll to the Marche Jean-Talon – meaning it took two hours to walk there.  Once we arrived at the market, we realized we probably weren’t going to buy any onions or eggs, seeing as we are tourists staying in a hotel, so we jumped on the metro and went down to Vieux Montreal.

Oh, wait, before we left the market we bought two pluots.  Ah yes, we are so wordly and fancy.  Let’s buy a couple local pieces of fruit to take with us on our travels today.  We love to immerse ourselves in the local culture and cuisine.

Hmm, let me just take off that sticker before I rinse off this little French-Canadian treat…wait a minute, does that say? You’ve got to be kidding me.

Well, those Californian pluots sure were delicieux.

Once we arrived in Vieux Montreal we headed straight for La Basilique Notre Dame – one of the top ‘must see’ spots in Montreal.  Unfortunately, there was a wedding just letting out.  And we were informed that there were several more weddings that day.  Try coming back tomorrow at 1:00 pm, she said.  But then this other man told us to come to the mass at 11:00 am the next day.  Apparently there would be a French choir, Gregorian chanting and an ‘open’ organ.  “The entire church shakes,” he told us.  “Plus, what’s tomorrow’s date?”  Um, our son’s four month birthday? Ohhh, The Feast of the Assumption of Our Blessed Virgin Mary.  Yeah, that was my next guess.  A giant shaking basilica sounded amazing, but, as you can tell by our lack of knowledge concerning that important date, we did not make it to mass the next day. Bad Catholics, bad. (My excuse is that I am not actually Catholic.)

Sidenote: Girls dress pretty skanky to weddings in Montreal.  I know this is a generalization, but it is what we saw.  All we saw.  Ladies, you are going to a wedding…in a church…a huge, old, gorgeous, famous church.  Get it together and pull down that fake satin hemline, or take off the purple glitter stillettos.  One or the other.

Maybe the groomsmen invited some of the, ahem, ‘ladies’ they met in some of the local Montreal, ahem, ‘establishments’…during the bachelor party?

So, we continued on to the port and strolled around.  One of the highlights of the day?  Sitting down at a cafe and having a cup of coffee, with this gorgeous, relaxing view: 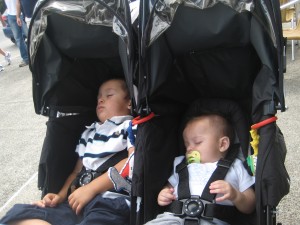 Then we did a lot more walking around.  We looked at the outside of all of the museums you are supposed to visit while in Montreal, but didn’t feel like attempting any of them with a stroller and a tired 2-year-old.  Their outsides were really pretty.

We found a great place to stop for a snack.  French fries (hold the gravy and curdled cheese, please) and beer. 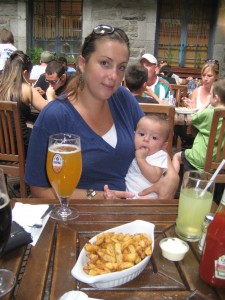 Then we discovered Place Jacques-Cartier, which was piled with restaurants and street performers, all on a huge, pedestrian-only hill leading down to the port.  It reminded me of Las Ramblas in Barcelona. (See? Wordly.)

We headed back to the hotel to change (Remember that two hour walk in 90 degree weather this morning? Yeah.) and get ready for dinner.  I had done lots of research before we left and thought I had found the perfect non-touristy French restaurant.  Unfortunately, as we began walking there, we realized it was really, really far.  We walked around, thinking we would find something else and stumbled upon Chinatown and the Latin Quarter.  Not really the “quaint” experience I had envisioned…

Luckily, we took a side street and did happen upon a tiny French Bistro.  The server/owner/bartender/food runner/busboy was hilarious, as he took care of the entire restaurant single-handedly and the food was delicious. 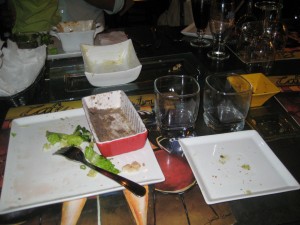 I am getting better about always leaving some food on my plate. (Diet Trick # 431)  I can’t imagine what I would have tipped the scales at the next day, had I forced down that last bite of lettuce.  Plus, it left me room for the caramel chocolate bar I purchased at the gas station on our walk home and then ate in bed…while half asleep…after brushing my teeth.  Somehow foreign “Willy Wonka shaped” candy bars are so much tastier than their American counterparts.

On Sunday we slept in until about 8:00 am again.  We drove to Fairmount Bagel to taste the famous sesame seed bagels of Montreal.  We bought seven bagels, with only one of them being of the sesame seed variety.  Once we tasted all of them we realized why the sesame seed is the one for which they are famous.  We drove back across town and bought a half dozen – sesame seed only.

We took our bagels (with fromage creme and spreadable lox) as we drove up Mont Royal. (Hence the city’s name: say Mont Royal three times fast.  You’ll get it.)  The views were beautiful and we saw the Olympic Stadium and all, but let me tell you that was no ‘mountain adventure’ or anything.  The road led us back down to the bottom before we had even finished half a bagel.

One more food stop and then we were ready to hit the road.  We picked up smoked meat sandwiches from Schwartz’s Deli.  This place had a line around the block and every tourist website for Montreal says you have to try their sandwiches. Listen, the flavor is good and all, but I wouldn’t suggest eating one while in a car.  Those things are greasy.  Even my Stomach of Steel husband looked a little queasy afterward.  That’s all I will say about that.

To make up for our complete lack of ‘museum entrance’ over the weekend, we decided to take an alternate route home and stop in Burlington, VT and then at the Ben and Jerry’s Factory in Waterbury, VT.  I had high expectations for Burlington.  After living in Boulder, CO for two years, my reaction to Burlington is:  Ehh.  It was beautiful, but I had hoped to be hit in the face with, like, five little hippie, fair trade, hole in the wall coffee shops.  Instead, we had to ask three different people for a coffee shop before someone recommended something other than the Starbucks or the Dunkin Donuts.  And then, in search of a veggie wrap (Yes, clearly I had planned out my ‘crunchy itinerary in Burlington’ ahead of time), we finally had to trek over to the grocery store.  Plus, I didn’t see a single white person with dreads and the Hemp Store looked like The Gap.  Burlington, from our short visit I have to say, you are about as authentically ‘hippie’ as Mary-Kate Olsen is ‘Bohemian.’

Our final stop was, however, a huge hit.  The Ben and Jerry’s Factory Tour was short and sweet. (My puns are always intended.) And the taste at the end is a CUP, not a SPOON.  Oh yeah, baby. 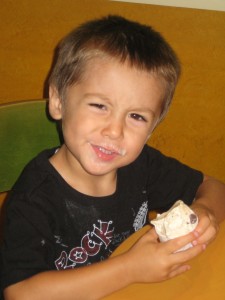 Here is Carlitos’ face when my husband turned down his sample because he “does not like ice cream.”  I know, Carlitos, I know.  It defies logic, so don’t try to understand.  Just remember it means more ice cream for us.  For the record, my husband hates unicorns and sunshine and puppies, too…and cupcakes make  his a** twitch. ($100 to the first person who can name the movie that last part is referencing.*)

Then we put the boys in their pajamas, buckled them in, and got ready for our drive home…which shouldn’t be that bad since we had already been wandering southbound for 6 hours or so…

Lucky for my husband, I love to talk.

Update:  Upon our return home, I came across The New York Times’ 36 Hours in Montreal.  It looks, pretty much, absolutely nothing like how we spent our 36 hours.

I also read that Robert Pattinson was just in Montreal.  So that’s who I saw kissing Kristen Stewart on the sidewalk Saturday night!  I knew he looked familiar.

* Are you insane? If I  had an extra $100 lying around we so would have bought an extra hotel room for the boys all weekend, instead of having them crash with us.

This entry was posted in Chronicles: observations of the outside world and tagged family vacation, Montreal, Poutine. Bookmark the permalink. Follow any comments here with the RSS feed for this post. Post a comment or leave a trackback: Trackback URL.

2 Responses to 36 Hours in Montreal…Family Style