I am getting closer!  Closer to fulfilling my bucket list.  I don’t really mean like an “accomplish in my life” bucket list, but rather an “eat after having that baby” bucket list.  I also don’t really mean a bucket of food, per se…although that does actually exist.  No, really.  Bucket O’ Food.  Kind of gross and strange and creepy at first, right?  But then you think, ‘Well, if I were stuck in my home because of a flood or something I guess that would be helpful.’  Although, as my friend pointed out today, it really is playing on our general fears as a nation that there is going to be some sort of Armageddon in 2012.  In which case, mind you, I don’t really want to stay alive for an extra 275 servings.  If everything in the world is completely destroyed and everyone else is gone, I don’t really want to prolong joining them by eating a bucket of food first, thank you very much.  So, personally I will be spending my $75 elsewhere…like on hot dogs! Yes, that is my segue-way back to the topic at hand.

So, I don’t know about all other pregnant women, but when I am pregnant I start keeping a list of all of the food and beverages that I am not allowed to have while pregnant.  Because, Lord knows there a million things you have to give up while pregnant.  Here is a list just of the food you have to give up while pregnant, which, mind you, does not even include things like crystal meth, drag racing and tequila shots- you know, things that make life worth living-that you can’t do for those 10 months.  Listen, I am not someone who likes to whine about pregnancy (my husband and closest friends are probably rolling their eyes right now and asking “Really, Annie? You’re not? Interesting…” And to them I would say that complaining a teeny tiny bit in the final weeks is not the same as whining throughout.  Honestly.) but when it comes to food, or rather, denying yourself food, well, I get a little cranky.

Once I have the baby I start going down the list and consuming each previously prohibited item.  God, you have no idea how good a simple smoked turkey sandwich is after denying yourself for 10 months. (Don’t you know? That 9 month junk is a conspiracy.  Pregnancy lasts 10 months.  Do the math.  40 (or 42!) weeks.  I hate to be that woman, but I think it is pretty darn clear which gender is behind this conspiracy…let’s leave it at that.)

Well, today I crossed three items off of the list.  Three!  I had an egg and cheese bagel this morning and I made my fried eggs runny.  Big pregnancy no-no.  Actually, technically I think runny eggs are supposed to be a no-no for everyone.  Salmonella shalmonella.  Delicious!  Okay, so then we went to Costco (hence awareness of existence of a Bucket O’ Food) and I crossed off two more in one single meal! A hot dog AND soft serve ice cream from a machine.  SO GOOD.  Absence does make the heart mouth grow fonder.

Maybe the best ‘post pregnancy’ food from my list was smoked salmon. The morning after I gave birth my husband brought me a bagel with lox from Zabar’s.  To. Die. For.  I have also indulged in salami, namely in the form of Italian subs from Mike’s Deli in the Bronx Little Italy, French cheeses, and sushi.  Sushi is always a big one to give up for 10 (TEN!) months.  I can’t believe I am doing this, but here is a picture of me right after I gave birth to Carlitos (baby #1).  This is pretty embarrassing, but I think it accurately shows just how happy I was to re-enter the world of sushi. Plus, my husband threatened to get this picture put onto t-shirts because it makes him laugh so hard so I think if I humiliate myself with it on the internet he will drop the t-shirt idea.  (Please ignore the red wine teeth – I was knocking two off the list in one night I guess.)

Here’s what is left on my list this time around: rare (like, still mooing, please)  filet mignon (preferable from a nice restaurant, which means my husband and I would have to go out to said nice restaurant, which means this one will probably be awhile…), French country pâté, oysters and something from this food stand that is right in front of our subway entrance that smells so freakishly good.  I think it is a Halal shwarma stand?  Feel free to help me  satisfy any of my remaining food items.  Honestly, I won’t turn down food donations.  Especially not French goods. And for God’s sake!  Let’s do some tequila shots, shall we?!?! 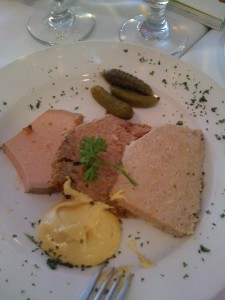 This entry was posted in Real: my personal trials, tribulations and tales and tagged food, pregnancy. Bookmark the permalink. Follow any comments here with the RSS feed for this post. Post a comment or leave a trackback: Trackback URL.