Posted by RealMommyChron on November 19, 2012

So, I am going to rip off the bandaid right away, just like my doctor did Thursday night when he called me with the full results from my biopsies.

The bad news: I have cancer.

I have seen it stated on the web, largely as quoted from Brooke Burke, that this is a ‘good’ cancer to have.  I disagree.  Yes, the percentage of people who beat it are high – and trust me that I plan on doing everything in my power to be within that high percentage – but it is cancer.  There is no such thing as ‘good cancer’ in my humble opinion.

As my cousin put it this weekend, “There is really only one type of cancer and that is fucking cancer.”

You know I don’t ever swear on this blog, but I think I this is a valid time to redeem my ‘one free pass’ from the swear word patrol.  There really isn’t a replacement word available in this case.

My main emotion is still shock.  Even though I suppose the fear and anxiety I felt during the past two months of tests probably stemmed (sometimes subconsciously, sometimes in the forefront of my mind) from worry that this could be the final discovery, I didn’t really think this would be the outcome.  As I prepared for each new test, my family reminded me to stay positive and the doctors told me how unlikely it was that they would find cancer.  How very, very unlikely.

At the end I finally let myself fully believe everyone.  I had tried to act positive throughout, but there was always a seed of fear, based on the unknown.  By the end, I wasn’t acting anymore.  I truly believed that the fact that there were so many nodules (cancer is more commonly found when there is only one nodule), I felt healthy, that the incidence of malignant nodules in general was so low, that the people conducting the biopsies said the preliminary examination of the nodule material looked benign, all meant I really was fine.  I unclenched my jaw, relaxed my shoulder blades and stopped stuffing cookies and sticks of butter in my face.   All was well.  When the following Wednesday came around and I still hadn’t received a phone call from my doctor, I knew everything was fine.  The letter telling me so must already be in the mail.

And then the phone rang with an unknown number while I was with a client Thursday evening.  Something told me to answer it (even though many of you know I don’t actually believe in answering my phone pretty much, meh…ever) and my stomach dropped when I heard who it was.  He told me to finish with my client and that he would call back in about 20 minutes.  After managing to finish up our session, I rushed outside toward the subway, ducking into a brightly lit orange and green cafe just outside of the subway entrance.  I understand Murphy’s Law very well and was quite certain he would call back the moment I was underground on the subway, so I sat on a stool, sipping on a Coke and watching New York pass by.  In a random twist called fate, God or chance, depending on in what you believe, my parents were visiting for about 48 hours, so I called to tell them I would be a little late and to please kiss the boys goodnight for me.

After almost an hour, he called.  He did exactly as I did above:  I have your biopsy results.  The bad news is, you have cancer.

I actually don’t blame him.  He took time with me where it was important: In his office, looking over test results, assigning appropriate new tests, not stopping until he got to the bottom of what was going on.  I am so thankful.

But his delivery was…well, humorous, actually.

The rest is all nitty gritty, really.  I have a consultation set up next Wednesday with the surgeon.  We will then set up a time for him to remove my thyroid and give me a lovely scar that allows for all sorts of fun “He had a knife…in a dark alley…but you should see the other guy…”  story scenarios.  Surgery should let us know the stage of the cancer, based on if it has spread or not, and whether or not further treatment is necessary.

Obviously, I am hoping that once they open up my neck they discover that the cancer is truly very localized and that my full treatment is the surgery.

But to be honest, I am trying to let myself feel the fear of knowing that isn’t the only possible outcome.  Yes, there is only a small chance that it has spread, but guess what?  There was only a small, small chance that it was actually cancer also.   I can’t really handle allowing myself to be cradled in the safety of  ‘Of course you are fine!’ and then sideswiped with ‘Okay, not totally fine’ again.  I really can’t.

So, I am going to be cautiously hopeful.

Also?  It’s my body and my life.  It’s my two kids I need to kiss and hug every day for at least 16 more years.   It’s my husband that is being strong but who I know would be devastated to lose me.  I am the one who heard ‘You have cancer.’ as a 31-year-old mom.

I own those aspects of it and I plan on feeling whatever fear, sadness, anger and confusion that I feel connected to those things.

But please understand that none of that means that I plan on moping or focusing on the negative feelings.  I will use positivity as the medicine I know it can be, I will be as strong as I know I can be, and I sure as Hell plan on fighting.

My mom told me to pick a bathrobe that she can get me for my hospital stint.  While I ended up choosing a beautiful peacock robe, this one was a very close second: 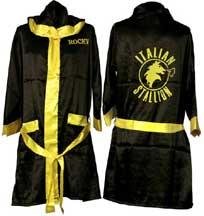 This entry was posted in Real: my personal trials, tribulations and tales and tagged 31, cancer, mom, New York City, Rocky, scared, strong, thryoid cancer, thyroid. Bookmark the permalink. Follow any comments here with the RSS feed for this post. Post a comment or leave a trackback: Trackback URL.