The other day I had a craving.  I crave things often.  It’s basically how I meal plan:

I have to have steak tonight.  I need chocolate…NOW.  I am craving scallops SO BAD. I’m jonesing for a salad.  Just a giant, crunchy salad, you know? (I almost never say that  one, actually.)  My body wants bacon.  Pull over; let’s buy some bacon.

My poor family is just along for a food coma-inducing ride.  Until they figure out their way around FreshDirect.com I guess they are at my mercy though.

In any event, this wasn’t even a food craving.  I just get easily distracted by words like ‘crave’ that I associate with food.  Sorry.

No, I was craving nature.  The good old outdoors.  Some trees.  Air that you want to breath deeply into your lungs.   An animal or two that isn’t carrying some type of nasty Mc’Nastiness Disease Of Filth.

We have done lots of farm visits and excursions before and I had the urge to go back to one we had already visited, called Stone Barns.  I tried to get the boys pumped about this plan, but they weren’t in the mood.

Plus, it was dark and gloomy outside.  Okay, maybe they’re right – we should save it for a sunny day.  While I researched other excursion options that had indoor activities, I kept having to swat away this annoying little buzzing in my ear.  It went something like this:

Ugh. Carlitos, how do you even know what Chuck E Cheese’s is?

My friend, Alex, he went there and he played games and he got MONSTER TEETH.

I looked on Yelp to make sure there hadn’t been any recent brawls or killings at our nearest Chuck E Cheese.  Nope.  Just weird adults leaving real reviews with big words and loads of pretentiousness about the cardboard quality of their pizza.

Seriously?  You live in NYC and likely even in Brooklyn.  Don’t ever, ever, ever go to Chuck E Cheese’s for pizza.  Especially if you don’t have kids in tow.  That just makes you dumb and creepy.

Anyway, once I finished double checking that we probably wouldn’t die there, I told the boys that we could go.  They crapped their pants and died.

No, I have no idea why this post is going so hard core Brooklyn.  It just feels right. Go with it.

So we went to Chuck E Cheese and guess what?  It was un-friggin-believable. Fuggetaboutit. Unreals.

Seriously, it was really fun.  But of course, there were moments.  You know, like when we first arrived and Carlitos and I immediately had to pee so I asked Xavi to hold the tokens WITH BOTH HANDS SO THEY DON’T DROP, OKAY XAVI? TWO HANDS. HOLD ON TIGHT.  BATHROOMS ARE DIRTY, XAVI.  CHUCK E CHEESE BATHROOMS ARE SOMETHING EVEN WORSE THAN DIRTY. DO NOT DROP THEM! 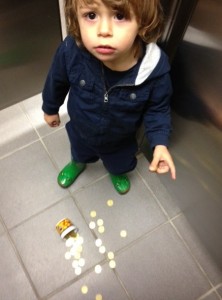 What? You mean, like, don’t do this, Mommy?  Is this what I shouldn’t do?  You sure? I’m just going to let go anyway and see what happens, okay?  You don’t mind picking up 50 tokens from the floor behind a toilet in Chuck E Cheese, right?  I mean you do love us, don’t you?  Yeah, that’s what I thought.

Things obviously got better from there.  I mean, how could they get worse? I guess Carlitos could have gone up to the giant, dancing rat and licked him or something, but that was unlikely.  It took us four years to convince him it is okay to play in mud and use finger paint. 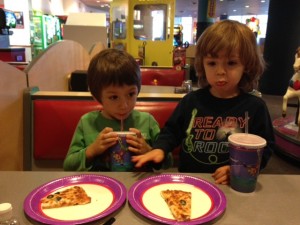 That Yelp review was totally right – the pizza does taste like cardboard.  And even watered down, the fruit punch had an effect on the boys similar to crack, it was that sweet, but honestly?  Isn’t that the point?  To be clear: If you take a girl on a date to Chuck E Cheese in an earnest, rather than playful way, your calendar will be wide open afterward, leaving you time to write verbose and obnoxious reviews on Yelp.  There won’t be a second date. 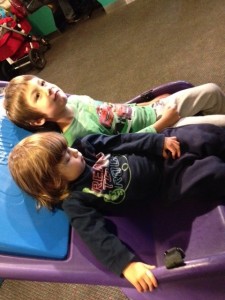 While Carlitos wanted to do all three ‘motion rides,’ Xavi pretty much just ‘tolerated’ rather than ‘enjoyed’ any game that didn’t involve balls. 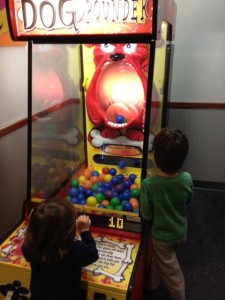 This was more Xavi’s speed. Although that poor dog would starve to death if it was up to 2-year-olds to ‘feed’ him.  That is one lonely ball in his hungry mouth. 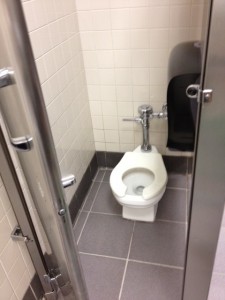 My personal favorite part?  The row of miniature toilets.  I’m sorry, but they are the cutest thing ever.  Not that I would let me child sit on one without seven layers of toilet paper, but still, super cute.  Good one, Chuck. 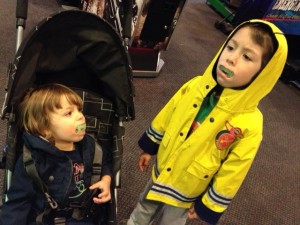 You thinking what I’m thinking?  Yup, here is your Christmas card 2012 preview.

After playing 50 tokens and even getting a 150 ticket strand from an employee because one game stole our tokens, we still only had 186 tickets. Which earns you…a tattoo. Like, the kind you can buy for 25 cents in the little machine at your local pizza parlor.  Actually, we did have enough for two pairs of ‘monster teeth’ which are actually glow in the dark vampire teeth.  And have been used exactly, ohhhh…NONE times since that day.

Fortunately, they did make for some fantastic photo ops. 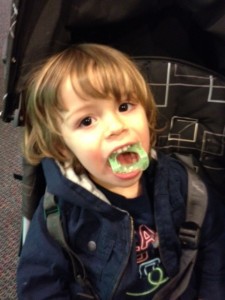 Awesome.  If there is anything I want more than my 2-year-old putting plastic, glow in the dark, Made in China objects in his mouth, it’s having him chew on them.  It clearly made him smarter already – upside down AND inside out! Impressive, Xavi! 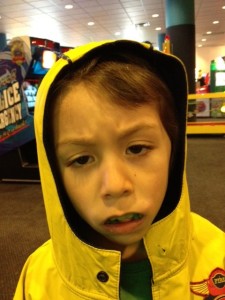 Is it just me or does it seem like these magical chompers made Carlitos smarter, too?

Okay, honestly, he clearly has his YA fiction series confused.  These are vampire teeth, Carlitos not zombie teeth.  Silly.

I can admit that all three of us had so much fun.  And we didn’t even get Coxsackie or pink eye or anything else body-ravaging and completely disgusting!

However, I still totally made the boys then go shopping with me in the mall attached to Chuck E Cheese’s, while looking at their plastic teeth, raising my eyebrows and saying, “Didn’t mommy take you to Chuck E Cheese’s today?” any time there were complaints.  By the end of the day Carlitos was saying he never wanted to go to Checker Cheeziz every again if it meant shopping afterward.  Unintentional score by mommy! Oh yeah!

Seriously, on the car ride home he grumpily said that it had been “the smallest day ever.”  I then listed everything we had done that day: played games at Chuck E Cheese’s, ate pizza, won prizes, bought him a moon sand construction set (don’t EVER do this if you value clean floors, by the way), and bought him new sneakers he wanted.

His response? You bought me sneakers first and then the moon sand.  You have it in the wrong order, mommy.

Actually, I’m never speechless.  What I really did was remind him that his days usually just consist of the playground and some Diego.  Games, prizes, pizza, a dancing rat, new sneakers and a toy?  What could be better?  Plus, mommy is in a good mood from buying shoes which happens exactly twice a year.  And mommy in a good mood is always in your best interest, kiddo.

Frankly, I would say this was the winningest day ever.  Perhaps I’ll be the one screaming for CHECKER CHEEZIZ the next time we have a free rainy day.  If we can get enough tickets to win two more ‘monster teeth’ for my husband and I we may truly have this year’s Christmas card done way ahead of time.  Super win.

This entry was posted in Real: my personal trials, tribulations and tales and tagged Chuck E Cheese's, dancing rat, pizza, tickets, vampire teeth, winning, Yelp reviews. Bookmark the permalink. Follow any comments here with the RSS feed for this post. Post a comment or leave a trackback: Trackback URL.