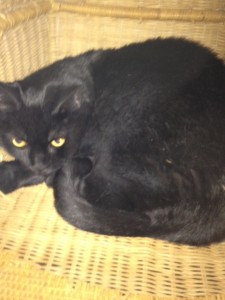 Whenever I heard about people having to put their pets down I always felt like they were obviously doing the right thing.  That they must be putting the animal out of their pain and misery with no other viable options.  I didn’t realize it would be this hard.  That there is almost always technically a choice to be made.  I thought if I ever was in this position I would feel relief to end Osa’s suffering.

Instead, I feel immense guilt and sadness.

The other morning I noticed our cat, Osa’s, food was still in her bowl.  Usually, she has eaten it all by dinner time.  There are never left overs the next day.  So I went in search of her.  She wasn’t in any of her usual places and suddenly I panicked that maybe the sitter had let her out the front door by mistake.

Then I saw her.  Curled up IN her kitty litter box.  Something was obviously very wrong.  Cat’s are very particular and clean creatures.  They don’t usually choose to sleep where they poop. I coaxed her out with some tuna juice (clue number three was that she didn’t come running as soon as she heard the can opener make contact with the tuna can) and that’s when I saw her hind leg.  She was dragging it.  My heart sank.

I got the boys in the car and then wrapped her in towels and put her in the passenger seat.  She crawled over and sat in my lap as I drove. It was just like old times.

You see, that cat had been on more cross country trips than most humans.   My college boyfriend first found her as a kitten.  We put up signs, brought her to the Humane Society and asked the neighbors.  Nobody claimed her, so my boyfriend took her in.   She got fixed, got her shots and got a leash.  Yes, a leash.  Well, I teeny tiny harness, really.

We lived in Boulder, Colorado at the time.  He would walk her down to Pearl Street.  Just a cute college guy with his bleached mohawk and his tiny, black kitten in her little harness leash, strolling along.  (I have a feeling he enjoyed the female attention this brought along with it…).  We would bring her on hikes with us.  And yes, even on our roadtrips back home to the East Coast.  No matter what kind of cozy nest we made her in the car, she would spend the entire trip on the driver’s lap, looking out the window.

I married that college boyfriend, and even though Osa had basically been a shared pet until then, it became official.  She traveled from home to home with us as our careers and (lack of?) family planning caused move after move.  She even lived with my parents on two different occasions when our living situations couldn’t allow for a cat.  Osa was nothing if not adaptable.

Once we had two children, Osa didn’t get as much love and attention as before.  She was well cared for, but she wasn’t the princess anymore.  And now I feel a lot of guilt about that.  After being pulled at, squeezed, drooled on and needed all day, I didn’t have it in me to let her nuzzle up on my chest and knead at me as she licked my neck, like she used to.  I feel guilt about that.  We moved to an apartment that doesn’t have a yard and is close to a busy road so she became a 100% indoor cat.  I have guilt about that.  And then she somehow managed to break a leg in our own home without me knowing it.  I have tons of guilt about that.

But most of the guilt is about the final decision.  We could have paid the $4,000 to have her leg re-set with pins.  But the veterinarian seemed to be giving me a nudge or an out or whatever you want to call it, from the beginning.  He made it clear that she would probably never recover feeling in that leg, leading to additional surgeries and therapy.  He said there was the option of just cutting off her leg, but for a cat of her age and with her weight, that would be a difficult road for the rest of her life.  And then there was her weight, which has increased greatly recently even though we put her on a diet.  I thought it was just winter weight but he said it is probably diabetes or a thyroid issue and that it would only make everything more difficult for her recovery, comfort and happiness. He referenced my children and made it clear that the money paid up front would only be the beginning.  That we would ultimately be putting in many thousands of dollars to increase the length of her life, even though it wouldn’t really be a comfortable life.  That he knows times are tight for any family with young children and we had to think about that.

I appreciate that tried to alleviate my guilt before we even made the final decision.  But I still feel pretty horrible.  I can only hope there is a kitty heaven and that she is happy.  As for the boys-especially Carlitos-he hasn’t cried since the first day and is now requesting a puppy.  I guess a lot can be said about the emotional resiliency of a 4-year-old.  After a nice sob and some wine once the boys were asleep and my husband came home, I felt much better.  Truthfully, though, I have a feeling having to say the words, “Yes, put her to sleep.” will be sitting in my heart for awhile.  It’s not a decision I wish on anyone.

We all miss you, Osa. Xavi still runs up and down the hallway yelling, “Gaaaatttttaaaaa!!!!” and I still expect to see you napping on our bed when we get home. I hope it was actually truthful when I told Carlitos that you weren’t coming home because the doctor was going to make your pain go away and let you sleep forever.  And I hope there is plenty of tuna juice for you up there.

This entry was posted in Real: my personal trials, tribulations and tales and tagged cat, hard choices, life, Osa, pet, putting down. Bookmark the permalink. Follow any comments here with the RSS feed for this post. Post a comment or leave a trackback: Trackback URL.