Posted by RealMommyChron on November 1, 2011

The day after Halloween is one of the worst days of the entire year if you are a parent.

Post-sugar high crash isn’t pretty.  Add to it the ongoing desire for even MORE candy and a slight headache from sipping cheap wine from a water bottle all night.  It’s a rough day.

Oh, you thought this holiday was about the kids?  Silly billy.

In all seriousness, the boys’ fatigue and sugar rush/crash/rush/crash delirium is a little overwhelming, too.

The treats also serve as another means for Carlitos to torment his brother. 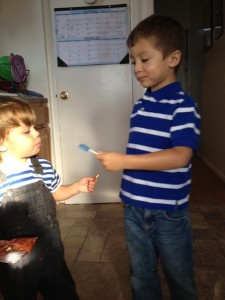 Oh man.  I totally feel bad for you that Mommy gave you lousy pretzels and is letting me have this blue Handy Manny lollipop.  Here, have a lick. 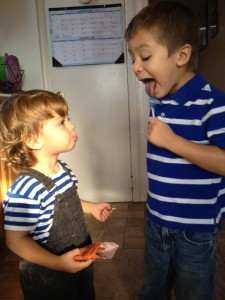 We kindly do them the favor of removing the best candy from their bags on Halloween night after they fall asleep.  Otherwise, their addiction to candy would be even stronger.

We are saving them from themselves.  If people really did have to take a test before becoming a parent as so many of us believe should happen, we would obviously pass with flying colors.

The truth is, they are so excited by getting any candy at all the next morning that they don’t even notice that all of the Reese’s peanut butter cups, dark chocolate Milky Ways and Butterfingers are gone from their little pails. 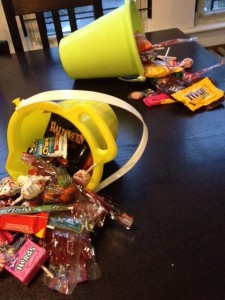 They’re all, “Yay! Mary Janes and hard strawberry candies!  Oh my gosh – is that a mini Twizzler?!?!  My life is so great!”

Thankfully, we all had such a blast last night that it makes any rumbly tummies  or earth shattering meltdowns kind of worth it. 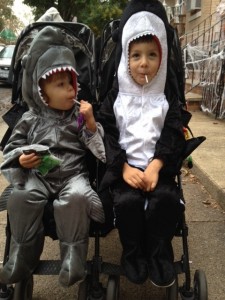 As you may be able to tell, Xavi is happy as a shark clam in his costume now, as opposed to earlier in the day.  As soon as he fully understood that he received candy in exchange for wearing it, he was game. 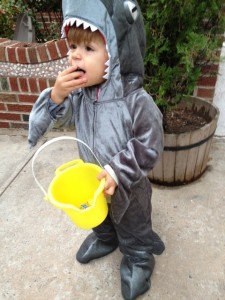 Although it still took a little while to truly grasp the concept.  At the first ten houses he tried to trade candy or just put his candy in other kids’ bags.

By the end of the night, however, he was sprinting from house to house and even trying to say ‘Trick or Treat!’ and ‘Thank you!’  He would then practice saying ‘Happy Halloween!’ whenever we put them in the stroller in between.

It was pretty much the cutest thing ever.

I think this was my favorite Halloween of all time.  The boys were at their cuteness apex, the four of us had so much fun, and the weather and neighborhood were perfection.

Now, if you’ll excuse me, I am going to go the gym and burn off the 8 stolen mini snickers I chose to eat last night because ‘the peanuts practically make them a healthy, protein-packed meal.’

This entry was posted in Real: my personal trials, tribulations and tales and tagged aftermath, candy, crash, gym, Hallowee, I live for Reese's peanut butter cups, Mary Janes are gross, rush, stealing kids' candy, worth it. Bookmark the permalink. Follow any comments here with the RSS feed for this post. Post a comment or leave a trackback: Trackback URL.

7 Responses to The Aftermath