Posted by RealMommyChron on October 31, 2011

My child seems to confuse Easter with Halloween.  Pretty easy to do, right?

What, with all of the black Easter baskets and and bloody cardboard cutouts of the Easter Bunny in the CVS Holiday aisle every Spring and all.

Last year he wanted to be a bunny rabbit.  Thankfully, I didn’t end up needing to make the final decision in my progressive parenting dilemma.  I am pretty certain I would have made him a bunny costume – white fluffy tail and all – if it came down to it, but ultimately, he decided on Triceratops anyway.

This year he has been telling everyone he wants to be an Easter egg.

I have no idea.

Until we saw a killer whale costume next to a shark costume at Marshalls.  He was sold. So was I:  Half price!

Mommy, did you know killer whales eat seals?  I have an idea! Next year Xavi can be a seal!

I love that he totally says it as though they are two entirely separate thoughts and not at all malicious.  Or at least as though I am going to fall for it.  He thinks his mama is fresh outta that pumpkin patch!

So, even though I didn’t have it in me to do another Halloween party this year, the boys at least finally have costumes.  And we did manage a few decorations out of recycled objects, too.

Here’s an idea of what Halloween looks like at our house this year: 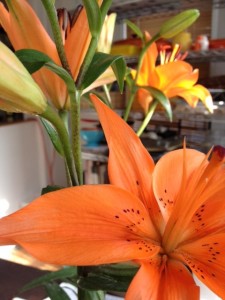 We start with some “Halloween Flowers” 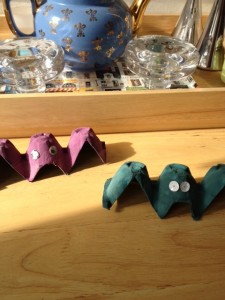 Then make some scary bats that are apparently too lazy to fly. 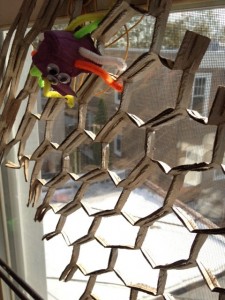 And some spiders.  Carlitos made this one.  I, being a novice, made mine with two eyes.  He informed me everyone was going to laugh at my spider – and not in a funny way – and make fun of me because everyone knows that spiders have three eyes. 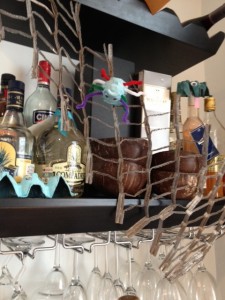 I wish I could say I was a kind mom and humored him by putting a third eye on mine.  But, as you can see, I have no fear of being laughed at…and no intention of letting some 3 foot bully push me around. 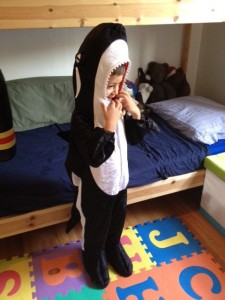 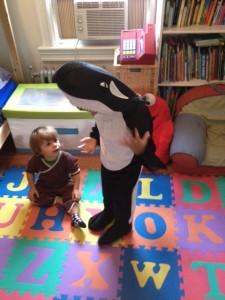 Xavi, on the other hand, had no desire to put on his costume.  So Carlitos did what you should always do with an 18-month-old: try to reason with them.  Even after hearing about the wonders of trick-or-treating, Xavi wouldn’t budge. 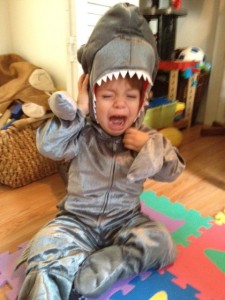 Being the amazing mom that I am, I tricked him and put it on after changing his diaper.  He completely understood why I had to do it that way and was super happy I made him give the costume a try. 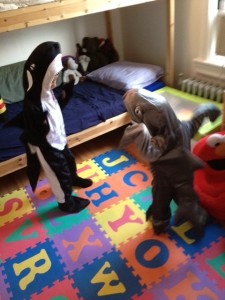 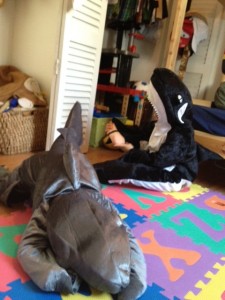 Then he remembered he was pissed.  And threw a huge tantrum. 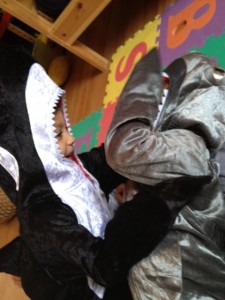 Luckily, even though I am a bit dim about a spider’s eye count, I am wise about the drinking habits of sharks:  They love juice. 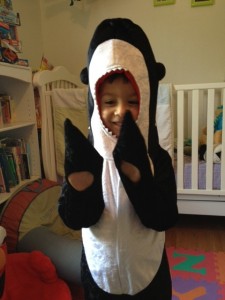 Thankfully, Carlitos is unfazed by his failed attempts to enlighten Xavi about the joys of Halloween.  He is just pumped about his ‘pointy hands.’  And about the massive amounts of candy he is about to consume. 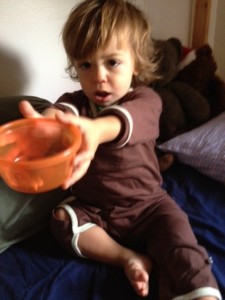 Xavi may have to just go as a Jedi.  Or someone from the 70’s, a Southern boy, or an attendee at a Renaissance Festival, depending on how you view his hair style.

At least, as you can see, he definitely has the whole “asking for treats” thing down.

Have a happy and safe Halloween, everyone!

2 Responses to Halloween Makes Me a SUPER Nice Mom