I dated a pothead in high school.  Actually, that’s not entirely true.  I dated several potheads.  And was best friends with one back then, too.  And lived with a few in college. (Is ‘pothead’ an offensive term? Sure hope not.)

And yet, I was never a big fan.

My husband and best friend are always making fun of me because I have a tendency to say, “Really?! They were smoking The Pot the other night?! They were doing drugs?!  How did I miss that?!” instead of calling it something cooler like ganja, weed or Mary Jane.  Actually, none of those words are probably cool.

I think the part they find even dorkier than my word choice is my shock that it had taken place.  Hi Annie, we are in our 30’s.  Adults.  Individual choices. …and it’s not like we ever know of anyone doing meth or bath salts or something.

So, imagine my surprise as I went to play date after play date once moving to NYC and began consistently smelling marijuana.  The first time I smelled it I was getting a tour of a friend’s apartment in Brooklyn while our kids all played.  She pointed out an odd metal window/opening by the staircase and I laughed and said I thought it didn’t work that well because clearly a neighbor must smoke pot and it is seeping through.

She looked at me kind of side-eyed and smirked and said, “Yeah…”

It’s happened several times since then at other play dates.

And here I had been wondering why I was the only mom yelling at her kids and putting them in Time Out.  It has all become so clear.  Which is pretty classic for me.  I am always the last one to get the joke or to know what everyone else already knows: like that everyone else in the room but me is high.  I miss the elephant in the room with amazing consistency – it’s kind of impressive.

The real bottom line is that parenting is tough.  When you are home all day with kids your nerves can feel as frayed as any denim Rihanna ever dons.  I can admit to yelling, putting them in Time Out and yes, even wanting to hit them.

I get wanting to escape…or at least tone down the edge of it all.  And I have totally been known to have some wine or whiskey at night to do just that.  Or have a sitter come just so I can go to the gym by myself or get a pedicure.  I have done those things.

Perhaps I wouldn’t ever feel so on edge or in need or a break if I smoked weed like it seems so many of my ‘mommy friends’ do?

Or perhaps I would become a (more) paranoid mom who would (literally) never take her kids out of the house.

Yeah, paranoid and lazy would almost certainly end up being more my style. That isn’t really in anyone’s best interest.

What’s the lesser of the two evils?  Is either side even evil at all?  I don’t think I will join this newest frontier of pot smoking moms.  But that has much more to do with the fact that when I tried marijuana that one time in college (I can’t get in trouble for that, right?  Right, Clinton?) it made me feel as though I had no control over my words or actions.  I don’t like that feeling.  (Ahem, control freak. I know.)  Personally, a glass of wine or two makes me much more calm and happy, while still feeling in control of my actions.  And it is something I know I can do without needing it every single day.  I totally get that evidently many moms feel the reverse.  Wine maybe makes them sloppy and pot works for just taking the edge off.  To each his her own.

When you talk about it like that it all seems a little crazy.  Like, why the heck do any of us need to be doing anything at all?!  Hello! We are raising beautiful, hysterical, loving, smart, creative little beings, not being forced to skin narwahls day and night with a side of physical torture.  I can tell you that if my judgy pre-kid self was reading any of this I would be angry at any parent for consuming anything that may impair them while their kids were in their care.  To be clear, I would have probably also said that my kids would never watch more than 30 minutes of TV a day or eat ice cream before dinner.

Yeah.  Things change once you actually have kids of your own.

Ultimately, for whatever reason, it seems to be a reality, this struggle to stay sane while raising kids.  In the 50’s many moms took pills, then there was the wine. Enough for wine producers to know they would make some big bucks producing wine like this: 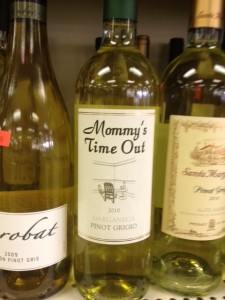 I think we are all just trying our best to be good parents and doing whatever feels right to us personally to get through the day having been the best parents possible…and also with some semblance of our sanity intact.

So, I withhold any judgement about this topic, but I will say it is prevalent.  Very prevalent.  In fact, the main reason I finally put this blog post onto ‘paper’ after it has been floating around in my head for a year or so, is this article on Jezebel today.  Chances are, you will see a mom today who is gently cooing at her baby and looking as though she is just blissed out on motherhood.  Now you will wonder on exactly what she is truly blissed out.

And maybe if you see some other mom yelling at her kid on the sidewalk you’ll think of sliding your dealer’s number into the palm of her hand.

I guess let’s just hope all of our kids turn out proportionally well to how hard we try each day as parents.  If that happens I think all the kids will be alright.

*The teacher in me says “Here’s a link if you want to learn more!” I’m not the author of the article(s)  below, but it’s still decent writing, I guess… I mean, if you like writing that isn’t mine.*

Smoking Pot is Good for Moms The Stir

A Heroine of Cocktail Moms Sobers Up The New York Times

This entry was posted in Chronicles: observations of the outside world. Bookmark the permalink. Follow any comments here with the RSS feed for this post. Post a comment or leave a trackback: Trackback URL.